1) Ability to have multiple contributors to a Picasa account/album (or whatever the name now that Picasa is in Limbo).
My wife and I both take a lot of family pics on our phones. Rather than having 2 separate public galleries, we use my account to display all the pics. Easy peasy for me. Not so much for my wife who e-mails me the pics, which I then upload.

3) Same as in #1, have multiple contributors to a YouTube channel.
For all the same reasons as #1.

I can’t believe it was 2 whole years ago that I gave Google Now an honest try. I thought I’d try it again and see if there was any improvements to the service. So far, it doesn’t look like there were many.

What could be helpful, but isn’t:

In my own opinion of course…

Google+ has been focusing on aesthetics far too much. They seem to be going more in the way of Pinterest.

Here’s the thing… Depending on the content you want, pictures, thumbnails, etc could be useless. In my case, it is. Very much so.

I want a quick eye scroll through a lot of content. I want to read headlines. Not look at pretty pictures with no real context. 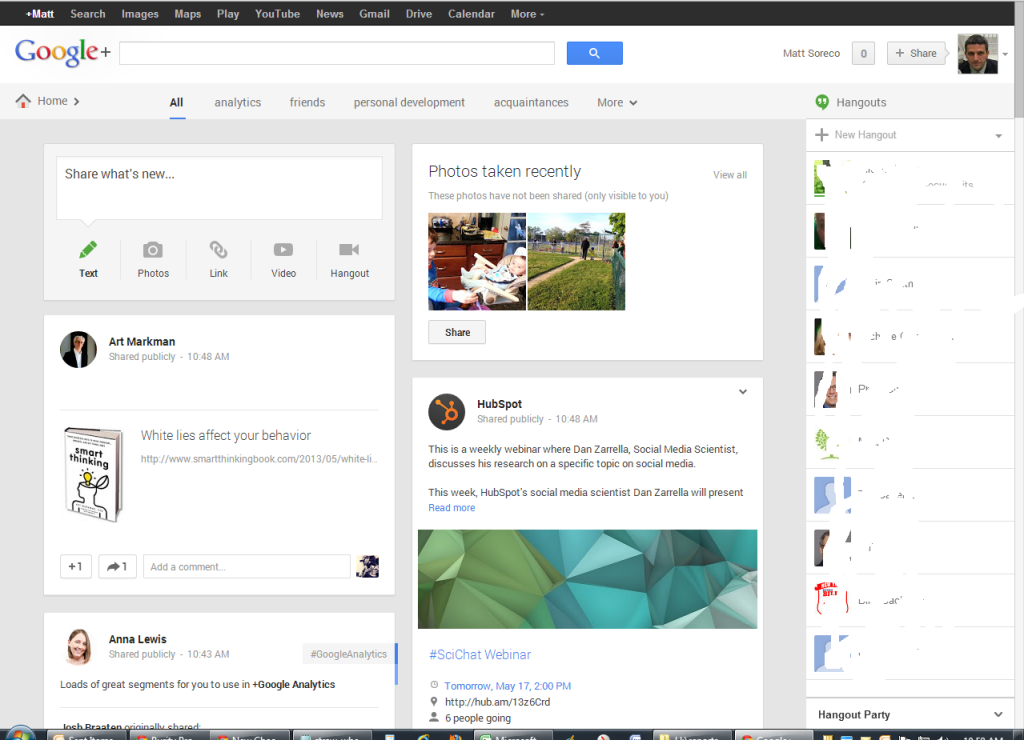 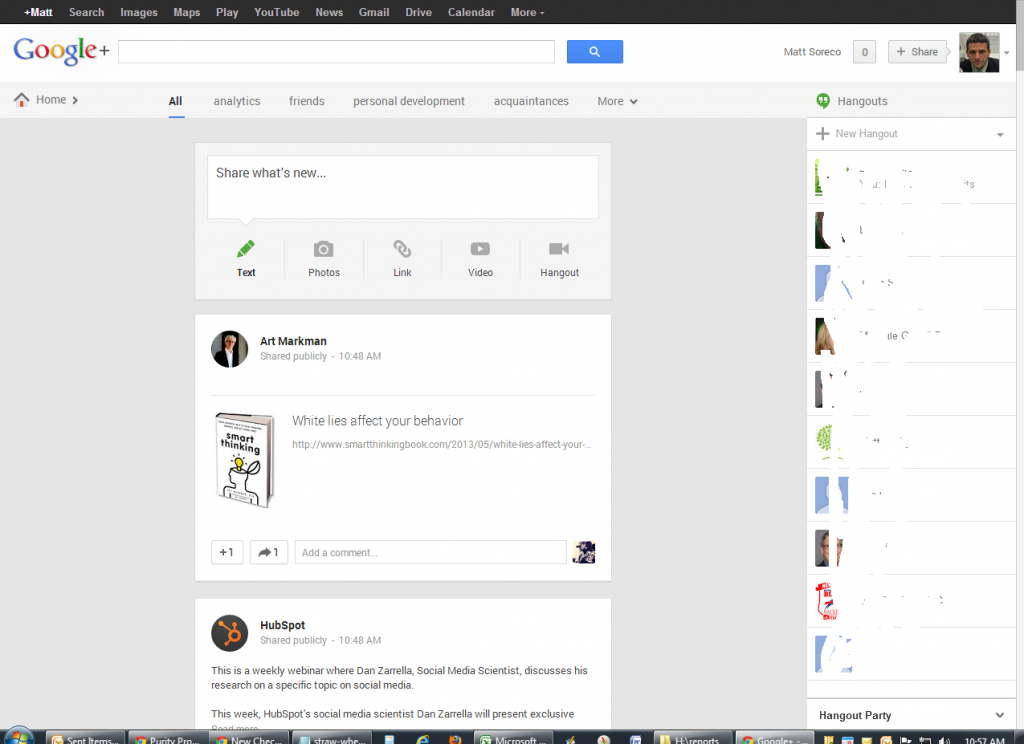 19 or so “posts” viewable (like Google Reader’s compact view). They are getting rid of Google Reader by the way… 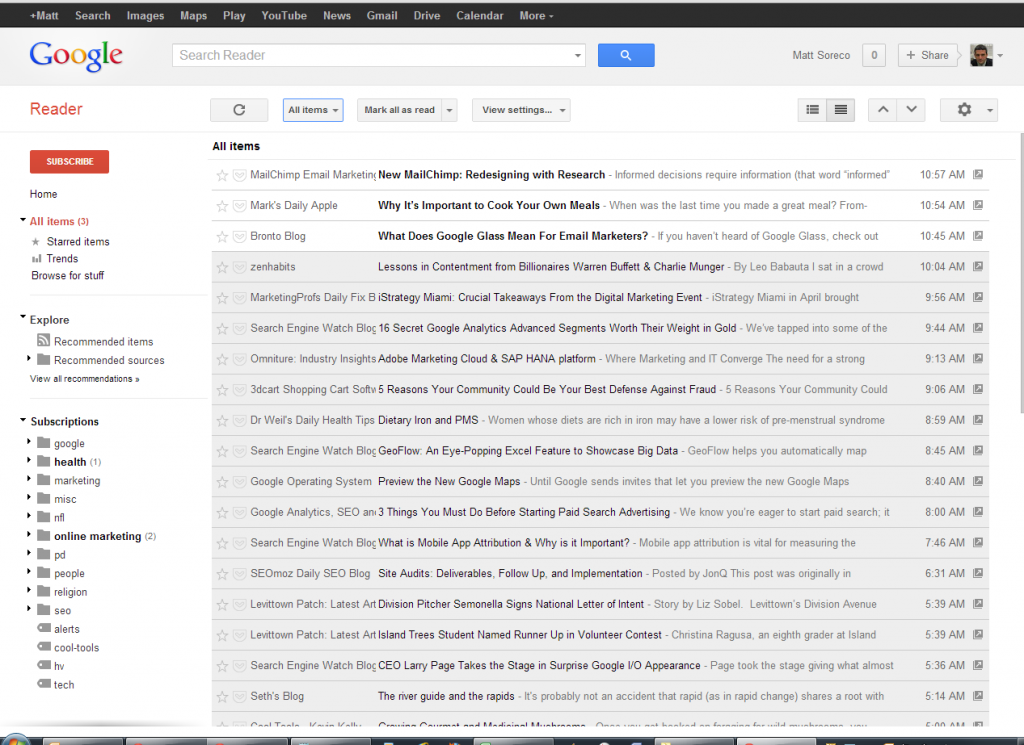 I have no patience for the new look. I know a lot of people stomp their feet after every Facebook design change. I don’t want to sound like that, but this one, for me, is a real reason not to want to check in throughout the day. Sorry G+.

I posted about some frustrations while using Google Now. That’s it. I’m done.

I’m not going to waste time being a beta tester for Google. The thing has so much wrong with it that it’s too time consuming for me to list.

Bottom line: Convenience-inconvenience=value. Right now, for me, it has negative value.

It didn’t give me anything that was really worthwhile. And the notifications and alerts on traffic conditions to places I wasn’t going to were becoming a nuisance. Plus, it cut the battery life in half.

The location and web search history tracking and the specific details of them are really creepy. And with no value in return, what’s the point.

I hope they are doing some more alpha testing at the old Googleplex. They have a lot of work to do.

Google Now is supposed to be a one stop of all things “now” in your life. For example, you are about  to leave work and you get a handy alert on the traffic conditions on the way home. Great, right?

All of these are shown in a stream of “cards.”

I decided to forgive a ton of privacy concerns to test out this fancy thing. Man do you give up a lot, like having it keep a detailed location history and search history–stuff I used to have turned off. Previously, having Google keep a detailed record of all my online and mobile activity gave no value in return. The latter hasn’t changed much.

I say “alpha” testing because that’s were it is at this point. Truthfully, it’s really not at a point that it should have been released to the public.

Here are my random observations.

Battery Life:
Since it requires GPS and Wifi (for more accurate GPS) on all of the time, and since it is constantly checking position, my battery life has been cut in more than half. Not good!

Sports Scores:
I’m not sure how it determines how long to show previous scores vs. when in advance it shows upcoming games. There is no setting to customize… It showed me the score of the Knicks vs. Rockets (12/17) game and didn’t show me there was an upcoming Knicks vs. Nets game (12/19) until the Nets game already started. I have the card to appear “before the game, during the game, and after the game.” There should be a check box to check off once you got the score so it won’t show anymore–then show the upcoming game instead. Same with football. The Bills vs. Seahawks game score was there for days. I was left feeling “I KNOW ALREADY!”

Stocks:
I assume the stock updates are taken from my Google Finance list. I’d like an option to see the whole list of stocks I’m tracking. I think I chose the right option “Card appears always” but I’m not sure how it determines which stocks to show and which to hide. Confusing.

Nearby Events:
Google may be only as good as the info that’s put in, because my nearby events are chock full of hockey games. Which would be nifty if the NHL WASN’T ON STRIKE! Some of the other suggestions are ok, but it desperately needs a mile radius setting. I’d like to see stuff on Long Island, and not so much in NYC if possible.

Weather:
One of the few useful things. A nice weather update and forecast.

Packages:
Very cool feature that recognizes shipment confirmation e-mails and lists them. However until you delete the e-mail, the card appears although they can be outdated. I’m seeing a “package shipped” card although the it was delivered already–because I haven’t deleted the e-mail yet. Sort of makes it unreliable…

Traffic to Home and Work:
This is probably the almost bestest feature. So close, yet so far. I get a handy status like “x minutes to work” with traffic info and a link to turn on navigation. This is great while drinking my morning cup of tea. I now know how long it will take me to get to work and if I need to leave earlier. Great, right?!?! NOPE! I’m sure I’m not the only one in the world who doesn’t go straight from home to work and from work to home. It should have options to put in some stops in-between, like my daily dropoff and pickup of my son at pre-school. That would be amazing! Instead of useless… Only time will tell if the “machine” will learn my habits and routes.

I debated setting a recurring morning and afternoon appointment in my calendar with the address of the pre-school in, but I don’t want to clutter my calendar.  Yet…

Direction to places searched:
Another ALMOST! there feature. This one came as a surprise. On my computer, I looked for nearby Gap and Old Navy stores. I step out at lunch to go to the Gap, check my phone, and there is a handy navigation card to… Old Navy! Man that was close. It would have been real handy if it picked the right store I ultimately decided to go to. Again, no setting to help it/adjust it in the future. I’m not sure how or why it chose one place over the other.

Directions to appointment in calendar:
This one actually worked out pretty well. If there is an upcoming appointment in my calendar with an address in it, a card will appear with the appointment time and the time it will take to travel.

Bug:
Navigation is an important feature for me. Especially on my trip home from picking up my son at daycare since the route is subject to traffic jams. I assume the same “work/home” thing that renders the Google Now feature useless for me is causing this bug. When I get out of daycare, I fire up navigation, only to be given directions from my work to home instead of my current location (a good 5 miles from my office). The actual location doesn’t update and work itself out. This requires me to close out of navigation and start it again. It happened more than a few times, so it has to be a bug. This costs me about 3-4 first world problem minutes a day!

That’s all for now. More of an unreliable novelty than something anywhere useful at this point. I’ll update post the more I play and learn. 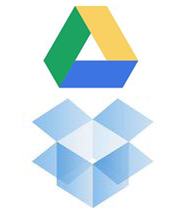 Rather than choose one over the other, I found a pretty cool way to use them together. It suites my needs and preferences perfectly.

What did I do? I put my local Google Drive folder IN my local Dropbox folder. So, things added to Google Drive (from web, phone, desktop, etc) are automatically synced to Dropbox too.

For now, everything in Google Drive is backed up in Dropbox, but not the other way around. I still have all of my videos, pictures, and music on Dropbox only as I paid for extra storage and don’t want to pay for extra Google Drive space too.

The way I’m visualizing it is Google Docs is for everyday things, new uploads, etc, where “Dropbox only” files are not frequently (or ever) edited files.

This solves several things for me.

I thought I was alone until I saw posts on G+, Twitter, Blogs, Google Help forums… The latest release seems to be a disaster. It’s been crashing both my home and work computers–not just the browser, but the whole computer. I’m not nerdy enough to find the exact reason why… What gets me mad is the glass house thing. As much as Google employees, PR efforts, and fanboys go on an on about it being faster and more stable than IE, the more aggravating it is when all that bragging turns hypocritical. I don’t even care if they fix it soon. I’d like to see some mud slung back at them.

Ok, so I was challenged in my last post about this over the word “proof.” I agree. This isn’t proof, but I do think it’s a strong signal.

Take a look at this article. See how may facebook likes it got vs google +1s? More than 10x more Facebook likes. 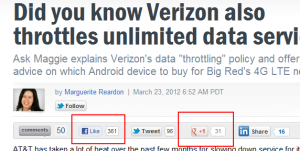 Only time will tell if G+ ever gets to Facebook popularity. Right now, I think the heavy users and evangelists are all in one giant echo chamber.

Something hit me like a ton of bricks. I’ve always been very skeptical of what Google considers a user. For example, they touted so many millions of Buzz users, when in fact many of the “users” were simply gmail users who turned it on (probably unknowingly) but never really USED it. So ACTIVE users are never mentioned when Google brags about any of they new initiatives. Google+ fails the same sniff test to me. Many big names I see active on Twitter, Facebook, Blogosphere are either not on Google+ or their usage and interaction is very small. Google is always bragging, but I see very little evidence. In fact, most of what I see is G+ power users complaining why so many others aren’t using the “wonderful” service.

So how does a lay person cut through all of the BS? Well, whilst viewing some YouTube videos, I noticed that extremely popular videos (millions of views) had only hundreds of +1s. All while having tens of thousands of YouTube thumbs ups.

Here is an example. Jeremy Lin video. Almost 7 million views and only 277 +1s. I checked and other very popular videos are the same. Granted the +1 button does not always show (in the Android app or online), but that might be another telling sign. It doesn’t take a mathematician to see the +1 rate is extremely low.

This is my blog, links, and other random stuff.